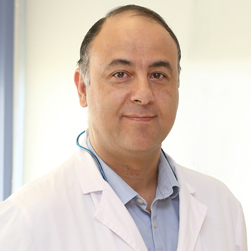 Dr. Calvo earned his Medical Degree in 1993 at the Universidad Autónoma de Madrid in Madrid, Spain and his PhD in 2003 at the Universidad de Navarra in Pamplona, Spain. He trained in Medical Oncology at the Clínica Universitaria de Navarra in Pamplona, Spain and completed his Advanced Fellowship in Drug Development at the Cancer Therapy & Research Center’s Institute for Drug Development in San Antonio, Texas, from 2003 to 2005, where he was a Senior Fellow and Clinical Investigator. While working in the Medical Oncology Department at the Hospital Vall d'Hebron in Barcelona, Spain, from 2005 to 2008, Dr Calvo was Co-Director and Senior Researcher of the Phase I Unit and director of the Genitorurinary Tumors, Sarcoma and CNS Programs.
Dr. Calvo is the Director of START Madrid Group in Madrid (Early Phase Clinical Drug Development in Oncology, www.startthecure.com) and has been the Director of Clinical Research at the START Madrid-Centro Integral Oncológico Clara Campal hospital, in Madrid, Spain, since its launch in 2008. He is also the President of the non-profit organization Investigational Therapeutics in Oncological Sciences Foundation (Intheos, www.intheos.org). In addition, he is full professor in Oncology, at University CEU San Pablo in Madrid, Spain, and Director of the Oncology PhD/Doctorate Program at Universidad CEU San Pablo.
Dr. Calvo is a member of the ESMO Faculty Group Principles of Clinical Trials and Systemic Therapy. He has been a member of the Scientific Committee of the ESMO annual meeting (2008, 2009, 2011, 2018, 2019 and 2020, being track leader in 2019 –Developmental Therapeutics track-), also member of the Scientific Committee of the Targeted Agents Therapies (TAT) annual meetings from 2018 on, and also, since 2015, at the annual EORTC-NCI-AACR International Conference on Molecular Targets and Cancer Therapeutics, where he has been appointed as co-Chair of the Scientific Committee for years 2019 and 2020.

He is also co-Director of the ECCO-AACR-EORTC-ESMO International Workshop in Methods in Clinical Cancer Research -MCCR Workshop- (2017-2021), in Flims/Zeist, Switzerland/Netherlands. Also, Dr. Calvo was Track Leader (2015-6) and Committee member (2013-6) for the Scientific Program Committee on the Developmental Therapeutics - Clinical Pharmacology & Experimental Track of the Annual Meetings of the American Society of Clinical Oncology (ASCO), as well as honorary member of the Cancer Education Committee of ASCO (2015-2016). Also, from 2018 on, he is a member of the RECIST committee and the Task Force on Methodology for the Development of Innovative Cancer Therapies (MDICT).

Dr. Calvo has co-authored one hundred and thirty peer reviewed scientific articles, in addition to multiple chapters in oncology books, as well as hundreds of international presentations at different major conferences and meetings, especially focusing on clinical development of new drugs in different tumor types. He serves as an ad-hoc reviewer of various oncology journals and has been appointed board editor for European Journal of Cancer and Investigational New Drugs and is a consultant and reviewer for different national cancer programs (Italy, UK, France). He is a panel expert advisor at multiple Advisory Boards of anticancer drug development and disease-specific cancer therapeutics. During the last 18 years of full dedication to Early Phase Clinical Drug development in Oncology, he has participated in around two hundred international studies, as principal investigator, and, during the last decade, especially focused on immunotherapy and targeted agents.